Everything You Need to Know About Mamluk Handmade Rugs

All the Early Egyptian rug weaving can be divided into two separate ages: the Mamluk handmade rugs and the Ottoman rugs.

It was during the rule of Mamluks – from the 15th till the early 16th century – that the best quality rugs were hand-knotted depicting the Islamic arts and culture.

What materials are used in the making of Mamluk rugs? Where were these rugs first crafted? What type of design patterns do they incorporate?

Read all about the legendary Mamluk rugs below! 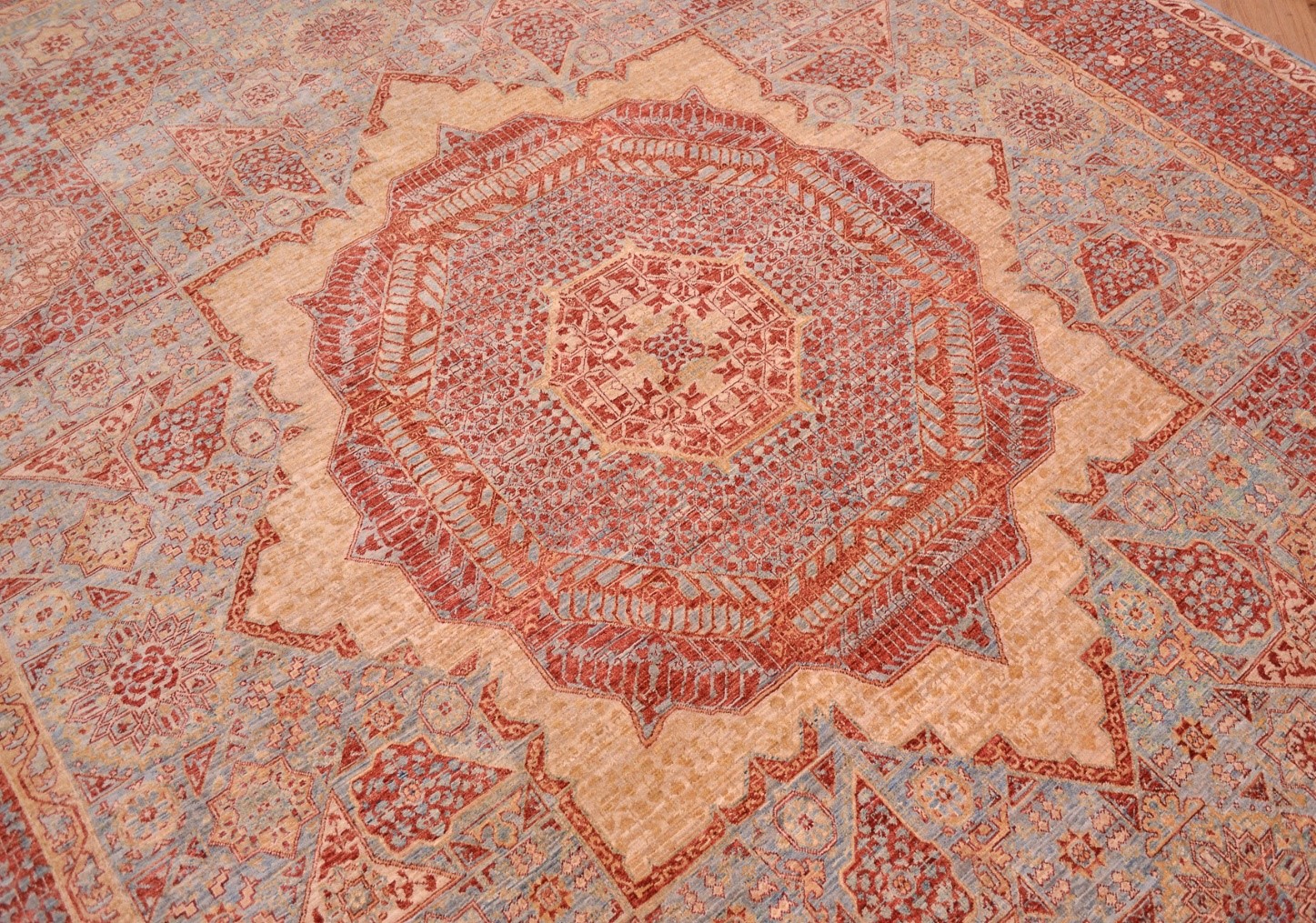 Who Were the Mamluk Sultans?

Emperors who ruled the Egyptian dynasty from 1250 to 1517 were known as the Mamluks. The first period of their long reign lasted from 1250 to 1381, whereas the second period was from 1882 to the year 1517 when the Ottomans conquered the land.

The word Mamluk roughly translates to ‘owned’, that’s because these people weren’t native to the land of Egypt, rather they were slave soldiers – mainly Qipchak Turks.

Who were these people then?

The Mamluks are said to have belonged originally from Caucasus, Southern Russia, and Syria.

To this day, the Mamluks are remembered as one of the greatest empires in the history. These people ruled vast territories and were sure to spread the influence of their culture wherever they went.

Before being overthrown by the powerful Ottoman Empire, the Mamluks created enough art to be remembered are kept in museums. The Mamluk carpets and rugs are among the finest quality of floor coverings ever created, and could be found in museums today.

Mamluk Handmade Rugs – The History of Their Origin

Crafted for the first time by Egyptian artisan during the rule of Mamluk Sultans, these magnificent handmade rugs are in a league of their own.

Geometric motifs and symbols are what dominate the surface of Mamluk rugs, making them a stark representation of Islamic art that was highly valued by the Mamluks and their supporters.

These carpets are regarded as some of the best floor coverings ever produced. Owing to their enchanting design patterns, the rugs are popular both in the Eastern as well as the Western Hemisphere. Although a rare type of rugs, Mamluk rugs are crafted even to this date by the master weavers of Pakistan, Afghanistan, Iran, and Turkey.

Mamluk rugs once adorned the floors in palaces, inside the homes of aristocrats, and in the properties of those with hereditary nobilities. Today, a good number of highly valuable ancient Mamluk rugs are stored in museums and kept in private collections.

It was after the Ottoman Turks conquered the land in 1517 that the patterns of the rugs being crafted were influenced by Turkish designs.

The Design Patterns and Style

Filled with geometric motifs and patterns including lots of circles and squares, Mamluk carpets mostly feature symmetrical shapes. Some rugs are often infused with flower motifs of hyacinths, tulips, pomegranates, and carnations. Design patterns that include palmettos, lancet leaves (saz), and pendants are also common.

The most significant design feature of Mamluk rugs however is the central medallion that’s often geometric. This medallion is surrounded by similar shaped smaller motifs, making the rug resemble the image of a kaleidoscope.

All Mamluk rugs – including the ancient ones created during the Mamluk reign, as well as the ones crafted nowadays by weavers from Turkey, Pakistan, or Afghanistan – feature design patterns that seem to have been carefully designed before being crafted to form a rug.

The designs, although traditional, are highly sophisticated and the entire rug appears to have a symmetry that’s been formed quite carefully and to perfection. For instance, in a Mamluk handmade rug, you’d notice that designs on the corners are resolved, and the motifs formed over the entire surface have a symmetry.

Nevertheless, it should be noted that not all Mamluk rugs are the same. Their design patterns often vary largely from one another.

On the basis of their design patterns, Mamluk rugs are divided into three different types:

The major design feature that helps distinguish Mamluk handmade rugs from other Oriental and Persian carpets is the fact that the entire pattern radiates outward from the core of the rug. These rugs are also usually framed by and outer border that included shapes similar to those in the entire rug.

The Color Themes and Combinations

The rugs are mostly boldly colored in shades of green, red, blue and yellow. The gem-toned tones, when paired with geometric patterns and motifs, and crafted using the finest quality material, end up forming rugs that radiate a magnificent aura that’s unmatched and exquisitely ethereal.

For those of you who wish to buy a Mamluk handmade rug online while managing to create and interior look that’s not too bold or overwhelming, you can also find Mamluk rugs that feature neutral color hues and earthy tones such as grey, beige, ivory, and off-white.

The Materials Used and Weaving Techniques

Most commonly, high-quality cotton, wool and silk is used for the purpose of crafting exquisite Mamluk handmade rugs. However, in some cases bamboo silk and threads of goat hair are also added to further enhance the texture and durability of these floorcoverings.

All the materials used are 100% natural. Plus, the wool for handmade rugs is always dyed using natural pigments, which means a handmade Mamluk rug is free of all sorts of chemicals and won’t cause any harm to the environment.

The use of premium quality natural materials and age-old weaving techniques are the two major reasons why these rugs are known to last for a lifetime.

In a sense, Mamluk handmade rugs are highly-durable. If you buy one today, it is sure to stay by your side for years on end!

But, don’t forget to learn how to keep your handmade rug clean!