An amalgam of western and traditional design patterns, Ziegler handmade rugs are more than just remarkable. The carpets radiate an aura of unique traditional magnificence owing to which they can easily be paired up with any kind of décor. That’s because the rugs have a softer color palette as compared to Persian rugs and are filled with delicate floral patterns that give off a modern vibe. These carpets are stonewashed for achieving a more antique-effect finish. Ziegler rugs are made in many nations across the world, including Turkey, Pakistan, and Afghanistan. At Qaleen, we are dedicated to providing you with the finest quality Ziegler rugs, that too without any shipping charges. Shop Now! 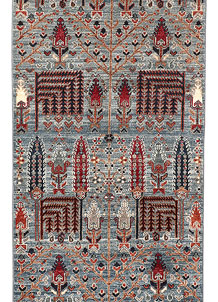 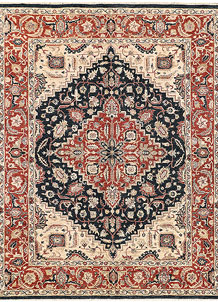 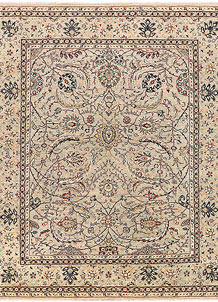 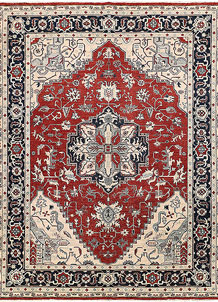 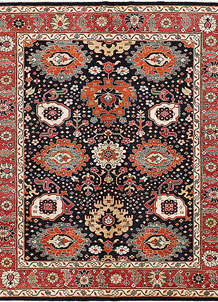 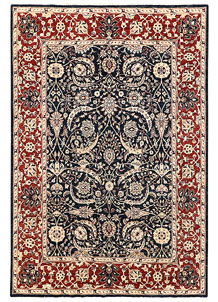 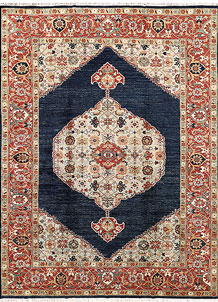 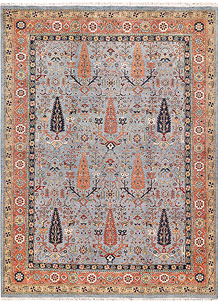 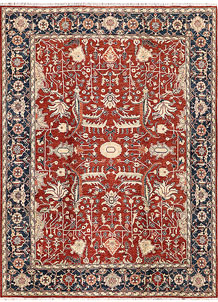 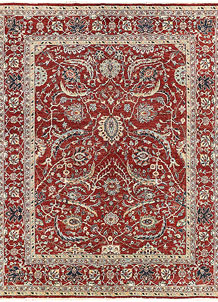 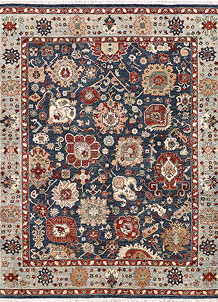 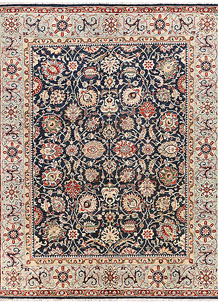 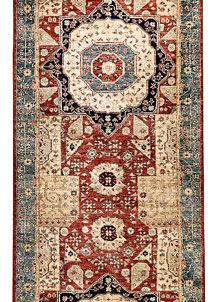 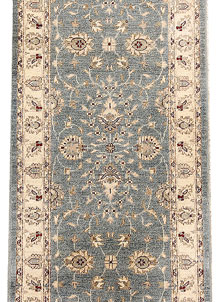 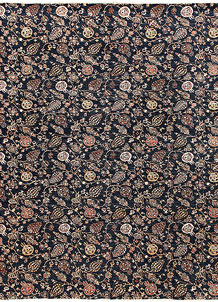 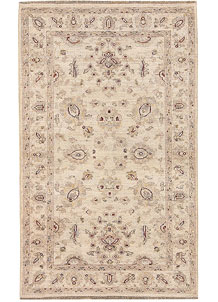 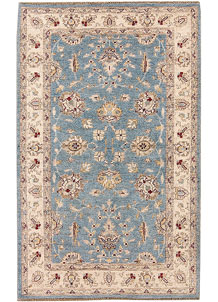 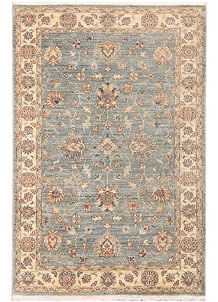 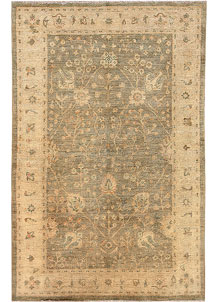 When it comes to keeping the interior décor traditional, yet subtle, soft, and not so overwhelming, most homeowners tend to go for a Ziegler handmade rug.

That’s because Ziegler rugs are incredibly charming, and feature the most beautiful, subtle hues combined with intricate floral patterns to complete a design that speaks elegance.

The rugs are filled with intricate floral design patterns that include shapes of vines, flowers and leaves. There are Ziegler rugs that have a central medallion surrounded by floral patterns and a similar border, and those that don’t have a medallion. In any case, the rugs are sure to take your breath away and make your interiors appear elegantly enchanting.

Moreover, since they were designed and crafted initially to be sold in the Western market, Ziegler rugs are a perfect amalgam of traditional and modern style patterns.

Also, considering that it’s only the experts who craft these beauties, a Ziegler would most likely exceed all your expectations in terms of texture and durability. Only the finest quality premium wool and cotton is used for the purpose of making the exquisite Ziegler rugs. In some cases, threads of silk are also added to enhance the look and overall appeal of the Ziegler rug.

A single Ziegler handmade rug can take months, even years to be completed depending on the size of the carpet. Which means, if you’re purchasing a Ziegler rug online, know that there has been a lot of hard work behind its making.

Moreover, the knotting techniques used while crafting a Ziegler rug for sale are ancient and have been passed down from one generation to the next since centuries. Hence, carpet weaving in Asia is a highly valuable skill and to craft a carpet of this quality, such as a handmade Ziegler, only the best weavers are trusted. That’s because there is no room for even a single mistake when it comes to the making of handmade Ziegler rugs for sale.

All in all, Ziegler rugs are a saturation point where everything perfect is brought together in the best way possible. Thus, having one as a centerpiece in your living room, adorning the heart of your home, would only invite more praises than ever before!

No need to travel to Afghanistan, Pakistan, or Turkey to buy an original handmade Ziegler rug! At our online store, you can order handmade rugs of your choice with just a few clicks, and have them delivered anywhere in the world without any shipment charges. And that’s without compromising on quality – if you’re not satisfied with the product received, just return it and get your money back.

Founded in 2004, we have grown into the leading online retailer for high-quality hand-knotted Ziegler rugs. We take pride in our value, continuous innovation, and outstanding customer support.

So, why wait anymore?

Ziegler Rugs: An Artistic Confluence of the East and the West

Have you heard of Ziegler rugs? If you think the name sounds Western, let us tell you, it actually is!

After all, the rug is the brainchild of a German company known as Ziegler and Company. The name Ziegler defines the design of the rug rather than being descriptive of the tribe or city associated with its origin.

Ziegler and Company is a German company based in Manchester, England and was founded in 1883. The company deployed skilled weavers and designers to create a new kind of rugs with the western markets in mind. These handwoven hunting carpets featured softer palettes, vegetable dyes, and contemporary styles. They were the modern take on traditional rug-making art. In other words, the traditional Persian designs were modified using the latest dying techniques. The end result – Ziegler handmade rugs – are known for their enchanting charm, subtlety, intricate floral design patterns, and an overall modern appeal unlike those peppy traditional Persian carpets often found in traditional rug stores.

After Ziegler rugs were designed and hand-crafted, it wasn’t late before the unique artifacts gained huge popularity in the western market due to their neutral color schemes and an ability to complement the western interiors. Today, the company has a base in Tabriz rugs and Arak (Sultanabad rugs).

However, it is not only the Ziegler Company that makes these carpets. There are many other manufacturers or independent weavers involved in weaving similar style carpets, and even when not designed by the Ziegler company itself, these rugs come in the market bearing the same name.

The major reason why handmade Ziegler rugs are so famous in the Western rug market is because they have a tendency to complement a wide variety of contemporary and traditional furniture with their various colors and patterns. The rug is widely used in resort and institutions around the world, apart from being used in the homes. Pair it up with modern furnishings or traditional furniture, the floorcloth is sure to make your personal space look uniquely appealing and aesthetically pleasing.

You can easily create a transitional décor look with a Ziegler carpet. Use it as a central focus point in your living room and add in the rest of your furnishings. Tiles, marble, or wooden floor, Ziegler rug complements it all. You can even use a Ziegler rug over wall-to-wall carpeting, or layer it with other handmade rugs to make your interior décor stand out!

Ziegler rugs on sale are a modernized version of the traditional Persian rugs. To give them a vintage look, they are bleached in the sunlight and sanded with stones to fade the pile. All the best quality rugs available at our online store are woven by hand in an old traditional manner, employing ancient weaving techniques that make the rugs extremely durable so they can stand the test of time better than most machine-made carpets.

Moreover, when it comes to Ziegler rugs’ design, traditional elements are blended with a modern style that lets many people integrate an oriental carpet with their contemporary interior without making the space feel chaotic or fallen apart. The typical colors used in the rug are beige, grey, pink, apricot, teal, red, blue, black and cream.

Wool and cotton are the most common materials used in the making of a premium quality Ziegler rugs. The rugs exported to western countries and cities, such as USA, New York, and Virginia are mostly made of wool imported from New Zealand. Hence, not only do the artifacts have a velvety feel, but they also last long, are stain-resistant, and don’t fade easily.

The best part about the use of this high-quality wool is that Ziegler rugs are stain and moisture resistant. So, you won’t have to stress yourself out with the fear of having your precious rug stained and marked whenever you invite guests.

In our online rug collection, you can find Ziegler area rugs for sale in various sizes, shapes, and colors. From square rugs, rectangle rugs, and circular rugs, to runners and oversized carpets, we’ve got it all!

If you want your purchased rug to perfectly blend in with your existing décor, make sure to carefully take the dimensions of your room and find the right size area rug accordingly. In case the rug you bought is smaller than the ideal size, try the latest rug layering technique and pair it up with a larger area rug to create an eccentric décor look.

Worried about the prices? We’ve got some good news for you!

Most of our fine-quality Ziegler rugs are available at discounted prices. So, choose your ideal Ziegler handmade rug now and get it delivered to your doorstep!

The reason why a huge number of rug buyers trust us is our no question exchange or return policy. There’s no way your spent money would go wasted!