Let your living space resonate comfort with a genial dash of tribal patterns and warm colors. Our tribal rugs are hand-woven by exceptionally skillful craftsmen who’ve inherited the art of weaving from their nomadic ancestors. Hence all the traditionally charming tribal rugs for sale at our online store are of the finest quality, made by using silky wool threads, cotton, and the kind of creative intelligence that’s still unmatched even in today’s machine-run world. The rugs you’d buy from us would live longer than expected, can retain their original aura for ages, and are unique in their tribal appeal and one-of-a-kind design patterns. That’s the reason why, when it comes to investing in unique flooring pieces, a handmade tribal rug can never go wrong! However, when purchasing a hand-knotted tribal rug online, make sure to take proper dimensions of your living space and get the right size and shape of area rug. 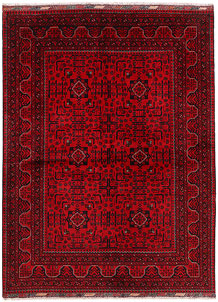 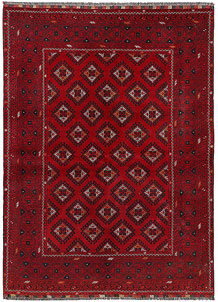 Glam Up Your Living Spaces with Handmade Afghan Tribal Rugs

Inspired by the art of ancient cultures, Afghan tribal rugs create a welcoming environment inside your home. They can be the perfect centerpiece for your living room or can be integrated with other elements of the décor to enhance the appeal. At QALEEN, we offer a wide range of beautiful Afghan tribal rugs made by the skilled nomad tribes of Afghanistan. They are woven from quality fibers and go well with both contemporary rugs and traditional spaces. So, wait no more and start exploring our category of Afghan tribal rugs to choose from.

Afghan tribal rugs are counted among the most popular tribal handmade rugs in the world.

Tribal rugs are traditionally made in Afghanistan. Some of the Afghan rugs are woven by Afghan refugees settled in Pakistan. Afghani tribes like the Pashtuns, the Tajiks, the Uzbeks, and the Hazaras have been weaving the rugs for thousands of years.

Afghani rugs display a wonderful confluence of diverse cultures across Central Asia, thanks to the spree of invasion and trade.

The trade has transformed the appearance and materials of Afghani carpets over the years. For example, the war rug tradition was triggered by the Soviet occupation of Afghanistan from 1979. It prompted the rug makers to incorporate the apparatus of war into their designs.

Handmade Paksitani Rugs have also been deeply rooted in the Afghani culture. It is one of the dowry items carried by a bride while moving to her in-laws. A pentagonal knotted rug is used to flank the bride’s camel. The women of Afghani tribes were mostly employed in carpet making. It took almost a year to make a full-size suzani rugs. If a large tribe defeated a smaller one, the surrendered tribe was forced to prevent knotting main carpets with their göl or to stop weaving main carpets altogether.

Certain types of tribal rugs feature a central medallion surrounded by geometric or floral motifs. However, in other styles you can find an irregular design with animal symbols and motifs placed over the rug randomly, such as Gabbeh rugs.

Afghan tribal rug has been the winner of international awards held every year in Hamburg, Germany in 2008, 2013 and 2014.

Afghanistan is one of the few places that still use vegetable and natural dye in the rug weaving process. The use of vegetable dye is more common among the tribal rugs, particularly some Balochi Afghan rugs. Here we have rounded up the major and best Afghan tribal rug types, styles, color, material, and size.

The Shindand or Adraskan Rugs:

Shindabad is one of the famous Afghan oriental carpets and is woven in the Herat Province. Their hallmark is the stretched human and animal figures being incorporated in the design.

They are weaved by Afghanistan’s Baloch people in the south-western part of the nation. Baluchistan encompasses the western third of Afghanistan, Eastern Iran and more than a third of the area of Pakistan. Baluchi carpets are known for their small size and look like a prayer carpet. They are generally loosely woven and feature multi-color pallet.

Mushwani, Mushvani, or Mashwani rugs are made by the Mushwani tribe that initially resided in the south of Heart near Shindand. They are the only Pashtun tribe that is known for weaving pile carpets. Their rugs are unique, as they weave a kilim and pile mix which is sometimes termed as “embossed” or a compound weave. Most of their rugs are small and square with geometric designs.

Herat was the epicenter of art, architecture, and intelligentsia of the Islamic world during the 15th century. Herat is still known as a center of traditional artistic skills. The Herat tribal rugs are weaved by the Turkmen belonging from the tribes like Yomud, Ersari, and Tekke. Herati rugs feature traditional patterns and the hues of red. These rugs are also known as Mori that means central design and quality.

Materials Used in the Making of Tribal Rugs:

Afghan tribal rugs were generally made of the materials that were at the nomads’ disposal in the early days. For example, they obtain wool from their sheep which is used in the warp and weft and pile as well. Some tribes use goat hair for the sides. Camel's hair is a popular option for the field areas of prayer carpets. The sheep are taken into streams to clean them before shearing. The wool is then picked by color and quality before combing, spinning, and dyeing.

Today, however, since the rugs are manufactured in the rug-making hubs around Pakistan, Iran, Afghanistan, and other Eastern regions, the materials used are of the finest quality, including soft wool, cotton, and sometimes threads of silk too that are used to create the most luxurious rugs.

Flatweave tribal rugs, such as Kilims are a perfect choice for outdoors since they don’t have a high pile and can be cleaned easily. Also, they’re reversible and can easily blend in with the modern minimalistic décor style.

How Tribal Rugs are Dyed:

Afghani weavers use both natural dyes and synthetic dyes for the coloring the hand knotted tribal rugs. Sometimes, the natural dye is combined with synthetic colors.

In natural dyeing, the yarn is transferred in a solution of alum, copper sulfate or tin. The yarn is then soaked into dye tubs until the desired color is obtained. Afterward, the yarn is then washed and hung out to dry. Natural dye on the tribal rugs rarely fade, and if they do, they fade tastefully, leaving the rug with a sort of vintage-antique look that most rug enthusiasts are deeply in love with. Sometimes, there may be an uneven coloring that is due to the shortage of wool or the use of similar color by an artisan. Naturally dyed wool is more likely to fade than its synthetic colored counterpart. However, it is normal. It makes the rug more beautiful.

Sometimes, tribal rugs are even purposefully faded in order to make them appear vintage. This is done by placing the newly-crafted tribal handmade rugs under direct sunlight, the UV rays act as a bleaching agent and cause the rug colors to fade away within a short time period.

Afghan rugs are available in a variety of different sizes based on the category and type of the rugs. Certain sizes are more common in some rugs than others. For example, the most common size in Afghan Baluchi rugs is 3x5 or 4x6. Bukhara rugs are generally available in larger sizes, such as 8x10 and 6x9. The rugs come in common shapes like square, round, octagonal and rectangular. You can even find a tribal runner rug that fits the hallways, bathroom, and narrow spaces perfectly.

Coming to the colors, Afghan hand-knotted tribal rugs are found in diverse color combinations that are similar to those of most traditional Persian rugs. Apart from the bright hues, including red, brown, orange, indigo, green, and blue, tribal rugs are also available in black and white that look great if you want to create a monochromatic look.

The process of spinning the yarn and the availability of dyes in Afghanistan makes the tribal rugs distinct from the rugs of other countries.

Coming to their prices, tribal rugs are often less costly as compare to Oriental and Persian handmade rugs. Their value is justified by their durability and longevity, and the rugs tend to retain their original shape for years on end.

You can find the best quality handmade tribal rugs at our online store. So, pick the perfect one now and we’d deliver it to your doorstep without any shipment charges, whether you live in New York, Virginia, or any other place around the USA.

We’re proud to have earned the trust of numerous clients who’ve shared their experiences with us and made our exquisite handmade rugs a part of not just their homes, but their lives.

The rugs available at our online store are sourced directly from the richly traditional carpet manufacturing hubs situated in the Eastern part of the globe, including countries such as Pakistan, Afghanistan, Iran, and India.

Here, in the streets of these regions, skilled weavers craft these masterpieces to perfection, making them ready to be sold around the globe, where they’d live on for years on end!

Whether you need a handmade Bokhara rug, a modern carpet, or a colorful tribal area rug, we have it all at Qaleen!